Heating Up Over Summer Programs 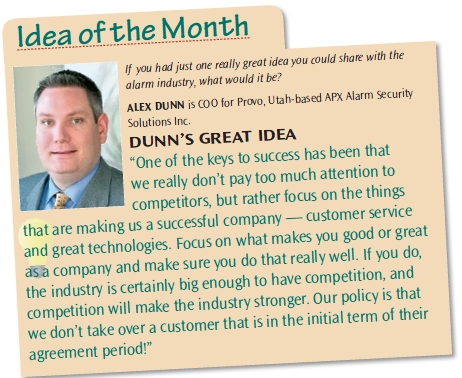 Let me offer a word regarding the "summer programs" that have entered the alarm industry. First, any effort that adds 150,000 new subscribers who now own and operate alarm systems is worthwhile!In fact, I think some effort should be made by the "traditional" industry to reach out and try to work with companies like APX.

Years ago, I was involved with much of the activity that went on as Broadview Security (formerly Brink's Home Security) was introduced to the alarm industry. At one point, Broadview founder Peder Kolind and I thought that merging Security Associates' practices and Peder's program would be a natural fit. It never worked out, but as history has told us, when all of the hoopla, uproar, indignation and downright antagonism toward a new marketer in the industry ended, we saw that Broadview is one of the most admired and successful alarm companies in existence.

Opening the Door to New Sales

Summer programs have actually contributed to as many new systems each year as all but the top nine or 10 companies in existence have accomplished in their entire history. That's substantial! Are there issues with the company and its sales practices? Probably. Is the company dedicated to minimizing and eliminating those issues? Definitely. Will those issues go away completely? Probably not. However, on a case-by-case basis, they seem to get resolved to the satisfaction of all involved.

I know this column will probably generate a few letters of indignation and surprise; however, at the end of the day, hundreds of thousands of American families are now protected. I don't know how many lives have been saved, how many homes protected and/or how many people have slept better because they now have security. What I do know is companies that have embraced direct selling techniques are the ones that have made the alarm industry stronger and more viable.

I believe the industry should welcome these summer programs. On a practical level, it seems as though everywhere the summer programs have been successful, it has raised the level of awareness on the part of potential subscribers, and all alarm businesses seem to rise along with the programs. That's a positive thing.

Is APX good for the industry?  I'm fairly sure that the answer is affirmative, but even if it weren't, the company is still here. It's not going to go away. Let's understand it, learn from it and help the company become a better citizen of the alarm community. Dunn, his associates and I would welcome it.