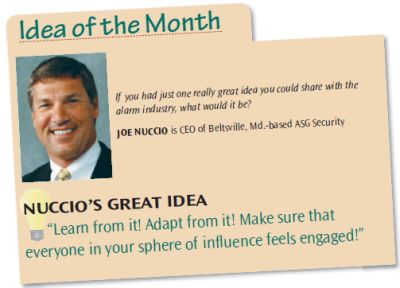 Joe Nuccio is an industry “player.” By that I mean wherever he goes, whatever he does and however he does it, you can be certain of a few things. First, he’s going to have a lot of fun doing it and will make sure that others will also have fun; and second, it’s going to be newsworthy and will likely be reported in the industry trades.

Nuccio’s great idea is significant. As is usually the case when you sit down and talk with him, I was struck by the depth of sincerity of the answer. It is something a manager/executive cannot fake, it has to be real. So let’s take a look at his comment, piece by piece.

Learn from it. Every experience provides a learning opportunity for you and the people around you. I will add to what Nuccio had to say about learning by sharing an experience of my own many years ago with one of the world’s most inspiring businessmen, W. Clement Stone. He said the core of every idea holds an opportunity to learn. First, you must recognize the idea. Second, you must relate to it. Third, you must assimilate the idea and make it your own. And finally, you must act on it. If you take a look at the first part of Nuccio’s great idea, what you see is the same thinking Stone had about learning.

Adapt from it. I really thought about this one after my call with Nuccio ended. I believe what he’s saying here is if there is a better way to do something, adapt to the better way. Don’t be afraid to make changes. Don’t be afraid to experiment. And when someone has a “great idea” of their own, and it’s first-rate, adapt to that idea as well. Finally, while my mind was on how to best construct this month’s column, my eyes were watching a new TV show about bosses who “go undercover” and take entry-level jobs in their own companies. I watched the president of Waste Management, one of the biggest companies of its kind in the world, hauling garbage, cleaning out portable toilets and doing other menial tasks.

True, he did it only for a short period, but everyone he met became important to him. He learned a great deal and when it was over, he went back to those people and helped them to become more engaged in the management of the business. And this was at all levels of the company.

What is the meaning of engaged? I think what Nuccio was talking about is helping people become part of a process that has a predictable result; one that will stretch a person to a new level and dimension that was heretofore thought to be unattainable.

Does this system work for Nuccio? You be the judge. When he came in as president of ASG, he was taking over a company beset with problems. Although I don’t know this for a fact, it was believed to be losing money and did not have a sterling reputation. Today, ASG has annual sales of $96 million and more than $5.4 million in recurring monthly revenue. Depending on what happens with some of the larger acquisitions in the industry, ASG will be the 9th- or 10th-largest company in the industry.

Learn from it, adapt, and have everyone engaged … a philosophy that builds large companies!