Rack Brains With Your Peers 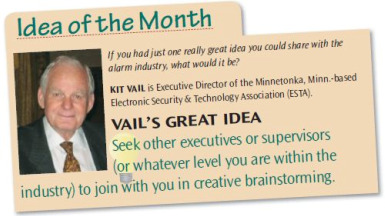 Back in the early 1970s, our company, Davis Marketing Group, was getting ready to start what would be the first educational program delivered to the alarm industry. I don’t think we realized at the time how significant that was, since what we were concerned with was mailing to the “right” dealers to attend such a program.

As it turned out, the only list available that met our qualifications was from Silent Knight Security, headed up by an individual who was to become a real icon in the industry, Kit Vail. Through the years, Vail and I have developed a mutual respect and a lot of happy memories. Back then he was an entrepreneur, which he remains to this day. Only now he’s guiding the destiny of the Electronic Security & Technology Association (ESTA), which has some real lessons for our industry.

I asked Vail what is the significance of building a for-profit company such as Silent Knight versus helping a group of entrepreneurs such as those in ESTA as its executive director. His answer was immediate and decisive: “When you build a for-profit company, you have to manage all of the functions of that company, i.e. manufacturing, marketing, research and development, etc. When they all work well, you have a profitable business. In what we’re doing now, the goal is not measured by dollars and cents, but rather by the information shared by the members of the group.”

Therein lies the greatness of what this group is doing. They meet several times a year, they are all noncompetitive companies from different regions of the country, and they spend several days at a time brainstorming finance, marketing, technology, as well as pondering the questions of the future of the alarm industry.

In February, I served as their keynote speaker and was extremely impressed with the openness of the group and the obvious desire they share to help each other. In many ways, it was similar to other industry gatherings; the one difference being there were no holds barred. Company financials were shared, as well as details of individual successes and failures. Ideas for collaboration were shared and potential business relationships were identified and discussed.

It seems what Vail and the group I visited with are doing is building a perfect model of what might otherwise be called a cooperative. But this group goes much further than a cooperative. They cooperate with each other in every aspect of their business.

If you were to ask the average alarm dealer where he/she goes to get ideas about the day-to-day management of their business, that dealer would be hard pressed to give you a specific answer. Certainly all of the national and state associations provide an environment of opportunity and growth.

Trade shows and various user groups provide an opportunity to catch up with old friends and make new ones. But only an organization such as ESTA (or, for example, Security Network of America) really follows through in providing a total growth environment for its members.

Now consider the great idea Vail has for us this month. Brainstorming with your peers may be as simple as solving a mutual problem. It may be as complex as getting a manufacturer to understand the needs of a company such as yours. But whatever the need is and whatever drives it, it will soon take on a different form.